Trigger Warning: If you don’t have an open mind about drugs, or how manipulative and dishonest a federal government can be, you won’t gain anything from this post.

As a long-time cannabis enthusiast, educator, advocate, and commentator I have often spoken about how poorly served society is by the needless “war on drugs” which had cannabis at its core. In 1970, in response to growing power among “hippies” (aka young folks with a brain) and African Americans, the U.S. listed cannabis – and several other highly0-useful compounds – as a schedule 1 drug. This is worth an examination. Until that moment, psychedelic medicines were used extensively in psychotherapy.

Make no bones about it. The use of psychedelic medicine is not bullshit. This has NOTHING to do with getting high. Unlike cannabis, no one is arguing that we should have mushroom cafes or dispensaries. They just want the politicians to listen to the bloody science.

There are currently dozens of companies, many publicly traded, working on various aspects of psychedelic medicines, from creating new formulations to performing studies on these drugs, to advocating for use of psychedelics as medicine. The non-profit Multidisciplinary Association for Psychedelic Studies has been working since 1986 to develop medical, legal, and cultural contexts for people to benefit from the careful uses of psychedelics (and cannabis).

Psychedelic Medicine Has No Place on Schedule 1

Schedule I drugs are defined as drugs where:

It’s not like they get it ALL wrong. Many of the drugs on Schedule 1 are natural and synthetic opiates/derivatives, some of which are incredibly dangerous (like Heroin). However, let’s examine some of the other ones on Schedule 1 and see if that holds up. 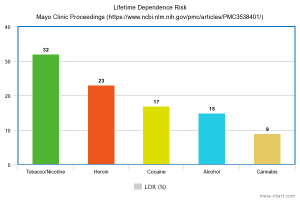 Cannabis – doesn’t meet ANY of the three criteria. In terms of the first one, addictive power, cannabis is the least dangerous of any of the most popular recreational / lifestyle drugs regularly used in western society. According to the Mayo Clinic, the “Lifetime Dependence Risk” of Cannabis is 9%, meaning that out of all those who try it, 9% will become psychologically addicted (there’s NO SUCH THING as physical dependence for cannabis). That drops to essentially zero if you don’t ever try it as a youth.

In addition to looking purely at LDR for potential psychedelic medicines, it’s interesting to look at the relative toxicity of these substances as against their potential for abuse. See the end of this blog post for a discussion on that…

MDMA (Ecstasy) – MDMA is perhaps the most egregious of all the placements on Schedule 1 as it has potentially the most promise as a psychedelic medicine. It has been found to cure PTSD and other trauma. Yes, Cure! Meaning, yesterday I had symptoms, now I don’t! This isn’t new.
Until the 80’s MDMA was used in therapy extensively. Couples therapy using MDMA was found to alleviate fear and allow couples to find a sense of bliss that is helpful in working through their issues. Only once it became the favorite drug of the rave scene did the US government see fit to put it on Schedule 1. Since then, several trials have been approved and are underway, so clearly it doesn’t meet criteria 2 or 3. My guess is MDMA will be the “big one”.

If this morning we just discovered alcohol, cannabis, tobacco (nicotine), and caffeine, which ones would be legal?

Mescaline (Peyote) – Mescaline has been used for thousands of years by native north and south Americans in religious ceremonies and to treat physical ailments. It is a hallucinogenic that occurs naturally in the peyote cactus (Lophophora williamsii), the San Pedro cactus (Echinopsis pachanoi), and the Peruvian torch (Echinopsis peruviana). Additionally, Mescaline has a wide array of suggested medical usage for disorders involving serotonin deficiencies such as alcoholism or depression. Like many others, in 1970, mescaline was added to Schedule 1 and is totally illegal (although you may legally possess the cacti in some jurisdictions), even though there is no evidence that it’s physically addictive at all.

The LD50 (Note 1) of mescaline for humans is unknown but based on experiments on laboratory animals, it has been estimated at approximately  800-1200mg/kg orally. So the average adult male might need to take about 60,000 mg. Given that the average human dose is between 100 and 1000mg, it would be incredibly difficult for a human to consume enough Mescaline to die, and not surprisingly, as with cannabis, there are no recorded human deaths from the ingestion of mescaline.

Lysergic Acid Diethylamide (LSD / Acid) – a highly visual hallucinogenic that’s virtually non-addictive, and with few contraindications (Note 2), and no known LD50. While studies of LSD as a psychedelic medicine are not nearly as numerous as for MDMA, cannabis, or psilocybin, research is now underway into its efficacy in treating cluster headaches (aka “suicide” headaches), Alzheimer’s, addiction, and PTSD. By opening up “blocked” pathways LSD encourages or allows new ways of thinking and is being studied at present for treatment of anxiety and depression, along with the other previously mentioned ailments. It is believed that LSD aids in a weakening or ‘dissolution’ of the ego, and an increase in optimism, self-assurance, and positivity, helping individuals see the ‘bigger picture’ beyond their personal problems.

One of the more promising trials has picked up from much earlier research on the administration of LSD to patients facing a life-threatening disease, where it helped to reduce anxiety associated with the anticipation of death.

There is a huge amount of empirical yet non-peer-reviewed data that “microdosing” of LSD (taking a small fraction of what is considered a recreational dose of LSD) brings those with depression, anxiety, and PTSD relief without impairing the ability to otherwise function.

More will be understood soon.

Psilocybin (Magic Mushrooms) – Use of psilocybin – like that of cannabis – predates recorded history. It is a psychedelic compound found in over 200 species of mushrooms. Psilocybin itself (like THC-A in cannabis) is not itself psychoactive, however, the body metabolizes it to Psolocin, which has mind-altering effects similar, in some aspects, to those of LSD and mescaline (specifically euphoria, visual and mental hallucination, altered perception of space and time and “spiritual” experiences.

Again, like most of the psychedelic medicine being discussed here, it’s virtually impossible to ingest a lethal dose. The LD50 value for rats is 280mg/kg. That means you’d have to ingest 1.7 kilograms or 3.7 lb of dried mushrooms, or 17 kilograms (37 lb) of fresh mushrooms, to kill the average 60-kilogram (130 lb) adult. Maybe Joey Chestnut could do that, but most of us would barf out the danger before reaching lethal toxicity!

It’s refreshing to see governments beginning to open up the rules more to allow these plants to be studied properly, and for some of the anecdotes to become data. I believe we will be having a very different conversation in a few years…

Toxicity of Psychedelic Medicines vs Potential for Abuse or Dependence

Toxicity can be measured in several ways, but one of the most useful is to look at the amount that a regular user would normally take (the “effective dose”), and compare that to the lethal dose, as a means of determining the relative “safety” of a substance

Take codeine and MDMA for example. The graph here shows that you’d have to take 20 times what the normal dose would be to kill someone (ok, technically, half of them!). For alcohol, it’s only 10. Notice that the supposedly benign nutmeg is actually more toxic than alcohol and as few as three tablespoons could kill someone.

Now, look at the drugs discussed in the post above, Cannabis (marijuana – man I hate that word), LSD, Psilocybin, MDMA, and Mescaline. Not one is more toxic than alcohol. For further context, 6 liters of water will kill you, as will 175 shots of espresso.

So arguing that these drugs are unsafe is total bullshit.

But what about their potential for abuse? Examine the graph below which plots the relative safety (like in the graph above) with their potential for abuse or dependency. The place to be is in the lower-left quadrant, that is, where the substance is both unlikely to lead to dependence and unlikely to kill you! The further up and to the right, the less attractive. So for the skeptics that made it this far, I congratulate you and leave you with one question…

If this morning we just discovered alcohol, cannabis, tobacco (nicotine), and caffeine, which ones would be legal?